** No nominations right now. Come back at a later time ** 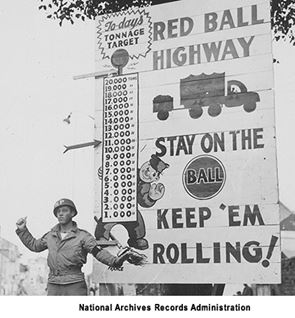 The “Red Ball Express” award was proudly named after the famous Transportation Unit in WWII.

The Red Ball Express was an enormous truck convoy system created in 1944 to supply Allied forces moving quickly through Europe after breaking out from the D-Day beaches in Normandy. Some 28 divisions were advancing across France and Belgium, each ordinarily requiring 700-750 tons a day. Patton's 3rd Army was soon grinding to a halt from lack of fuel and ordnance. The route, marked with red balls, was closed to civilian traffic; the trucks were marked with the same red balls and given priority on regular roads. The key to pursuit was a continuous supply of fuel and ordnance, thus leading to the Red Ball Express.

Since this award is from the Tactical Wheeled Vehicle (or Trucks) Division of NDIA, we thought the award should be a lasting tribute to those that pioneered the way for us that serve or support the military transportation industry today.